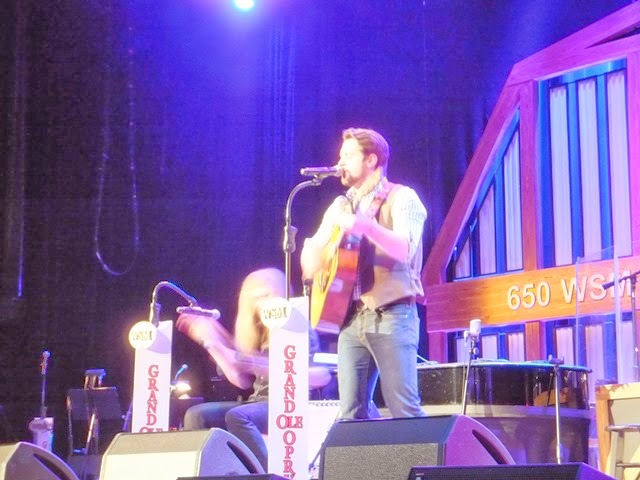 The dynamic duo of childhood buddies Kris Bentley and Nick Jamerson are about as country as it gets.  The two boys from Prestonsburg in Eastern Kentucky are probably better known by their other name: Sundy Best.  The band's name refers to wearing one's best clothing for church on Sundays and also to how people talk in the South where they say "Sundy" instead of "Sunday."

Let me tell you, these country boys have definitely come a long way from Kentucky.  That's because they just recently celebrated their 3 month anniversary on February 26 of making their Grand Ole Opry debut last November at the Ryman Auditorium in Nashville.

I consider myself very fortunate and extremely lucky to have been in the audience for this very important moment in the band's career.  Now they weren't the headliner that night, (that honor went to Craig Morgan who was celebrating 5 years as a member of the Opry that night), but they sure brought the house down.

After closing their three song set with the hit single "Home" Bentley and Jamerson received a resounding standing ovation from the big crowd at the Ryman.  Not only was it significant because it was their Opry debut, but also because they were the only act to achieve the feat that night.

Since then it has been one heck of a ride.  Not only have they made multiple appearances on the Grand Ole Opry since then, but their second album comes out this Tuesday.  Keep up the good work boys and stay humble!


Tim Musick
Copyright 2014
All Rights Reserved
Posted by D. Musick at 7:44 AM No comments: